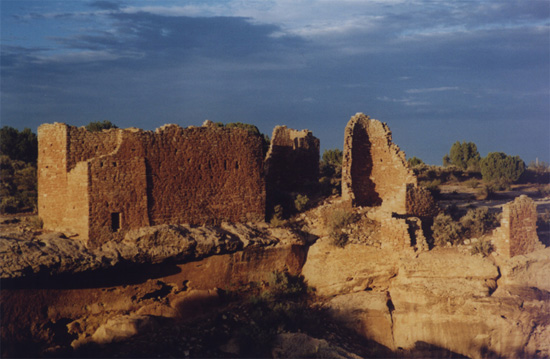 A SUMMER AT HOVENWEEP

N THE SOFT RAYS of the setting sun, the sturdily constructed walls of orange Dakota sandstone glowed a brilliant amber yellow. The shadows of the seven-century-old "Hovenweep Castle" wrapped themselves around the towers and climbed into the windows and cliff-face doors. I sat alone on a slab of slickrock across the canyon and watched the sun's half-hour performance, pausing only to snap a picture.

Hovenweep is a small national monument in the high desert of southeast Utah, home to dozens of well-preserved Anasazi Indian ruins. The largest and most spectacular structure is Hovenweep Castle. Five summers of family vacations to the Southwest provoked my passion for the area and I decided to spend last summer volunteering as a park ranger at Hovenweep.

Before I could escape to the desert, the final two months of my junior year in high school tumbled to a close with AP tests, SATs, finals, and the culmination of year-long projects in English and biology; even the day before my trip I struggled at the DMV to get my driver's license. The rush of fancy cars, fast food, and computers that is life in Silicon Valley lost its clutch as I left the Bay Area and entered the calm, mysterious desert.

Hovenweep remains isolated and unvisited compared to most national parks. During my stay, five paid rangers and three volunteers--including myself--ran the entire monument. I worked forty hours each week at maintenance and interpretive tasks. I weeded out non-native plants like horehound and cheatgrass. I patrolled the trails at outlying ruins and disinfected storage sheds with bleach to eliminate hantavirus. I gave guided tours to ruins and petroglyphs for park visitors and I constructed a new parking area for ranger vehicles. Although shoveling gravel and collecting hundreds of small stones for the parking area was difficult in the ninety-five degree weather, I enjoyed the work because I was outside in the clean, dry desert air, and onrushing deadlines never hurried my tasks. I was helping to "preserve and protect our natural resources," as the National Park motto states.

Unhampered by telephone calls, orthodontic appointments, class assignments, and countless other commitments that divide and conquer my time at home, I felt free at Hovenweep to read poetry, a play, and six novels; to practice my trumpet each day; and to keep a journal of events, ideas, and reflections. On weekends, I explored nearby national parks. I watched the setting sun create a double rainbow over walls of stratified red rock at Canyonlands National Park. I got soaked in a desert thunderstorm in the Grand Canyon and arose the next day at five o'clock to watch the sun rise over the east rim.

In the warm, breezy evenings after work, I often joined the Hovenweep staff for ice cream, evening programs about the Anasazi, or birthday parties. United only by what Edward Abbey calls the "fascinating quest for the great, unimaginable treasure which the desert seems to promise," the small staff at Hovenweep was a diverse group. Rachel, another volunteer, had the whole staff collecting bones for her art project back in Iowa where she was born and raised. Her vegetarianism left her at good-humored odds with Jim, a meat-and-potatoes thirty-two-year army veteran who was active in the Republican party; Jim came to Hovenweep because there was good fishin' around. Another Jim, who was a reverend in an obscure religion, performed the wedding ceremony for our chief ranger, Don, a full-blooded Ute Indian, and Kristi, a former volunteer at Hovenweep, atop the nearby Sleeping Ute Mountain. Hovenweep was a change in the pace of life for me, an alteration from the typical business-oriented world I was acclimated to at home. I did not need to account for every minute spent, and my days were not governed by a monthly planner.

The midday desert sun bleached colors and details together; the night hid them in shadow. At sunset, each individual sandstone block, chipped into shape seven hundred years before, and each juniper tree, cliffrose, and sagebrush, shone in the sharpest detail. Like the calm clear rays that illuminated the ancient structures at sunset, a summer at Hovenweep was an opportunity to reflect upon the beauty of nature and life. I look forward to the next time I can watch the key-shaped windows and D-shaped towers fade into the pure blue desert sky.