Current major projects in the laboratory are focused on belowground function, especially in dryland ecosystems.

1. CRITICAL ZONE PROCESSES IN DRYLANDS
One of my the main unifying themes in my science has been filling in our knowledge of belowground processes. In "critical zone" science, the goal is to combine knowledge from many disciplines to understand surface-level processes from "plant canopy to the ground water" in a holistic way. This approach is very appealing to me because it's exciting and fun to combine expertise from a range of disciplines to gain an unprecendented understanding of how a system works. I've recently gained the opportunity to participate in a project investigating critical zones in drylands with 18 other collaborating scientists. The critical zone approach has been less often taken in the study of drylands, and our project aims to fill this gap. Our main focus is on combining knowledge of carbon, water, and nutrient cycling to better understand all of these processes in drylands.

A conceptual figure of the dryland critical zone project drawn by one of our collaborators.

Our laboratory's work on this project will be to work on some of the carbon aspects, including partitioning carbon sources that contribute to CO2 efflux from the ecosystem, especially soils, and to work with the hydrology and nutrient groups to create an integrated understanding of how carbon cycling responds to hydrologic conditions. We also have a closely related project looking at some of these same questions in pecan orchards that are growing along the Rio Grande Valley. The work is relevant for understanding how drylands contribute to global C fluxes, and how water resources interact with carbon to control sustainability in areas such as the El Paso border region.

We are currently wrapping up work on a major investigation of the role of fungi in dryland soils. Fungi are uniquely adapted to dry environments and also have exceptional capabilities to move nutrients. As such they are well known in their role as mycorrhizal symbionts to plants that help scavenge nutrients from soils. However, in deserts they may play an even more crucial role by forming extensive webs of biotic connection among the denizens of the desert, specifically plants and biological soil crusts. However, this fascinating idea has not been totally proven. We have been using methods such as isotopic tracers to follow elements through the fungal hyphae as well as experimental manipulations of the fungi, the nutrients, and other aspects of the system.

Soils in the Arctic tundra are wet, often bordering on bog-like. As such, we believe that the exchange of materials and energy among the key organisms in this ecosystem are essentially aqueous. In these almost aqueous environments, observation and manipulation of soil pore water chemistry can unveil the key mechanisms controlling C and N cycling. We have seen evidence of the potential predictive power of soil pore water chemistry: in seasonal measurements of soil pore water sugar concentrations, which appear to closely track patterns in plant growth, suggesting that the sugars are being exuded into the soil by plant roots and not immediately taken up by microbes. Exploring the dynamics of these processes at different soil depths and among different vegetation types may yield a greatly improved understanding of C cycling in the Arctic tundra. 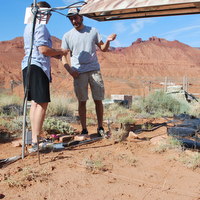 Climate change in dryland ecosystems
Just before I came to UTEP, I worked on biological soil crust (biocrust) responses to elevated temperature and changing precipitation. Our analyses of the net exchange of carbon between biocrusts and the atmosphere in a multiyear 2°C warming experiment (infrared heat lamps) showed increased carbon losses in the warming treatment, suggesting negative impacts of warmer future climates on biocrusts. We also discovered these crusts can perform photosynthesis under snow despite living in the desert. 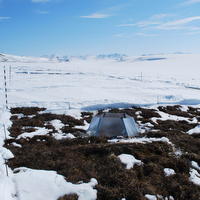 Changing seasonality of plant-soil interactions in the Arctic tundra
Arctic soils contain large stocks of carbon and may be a significant CO2 source in response to climate change. Using an early-snowmelt×warming manipulation at a site near Toolik Field Station on Alaska's North Slope, our team investigated changes in soil nutrient cycling in response to changing climate and seasonality. Our results showed that snowmelt acceleration causes more rapid early-season nutrient immobilization in soils and that early snowmelt in unwarmed plots can cause season-long reductions in root growth and inorganic N availability due to plant exposure to harsh conditions in the absence of snow. 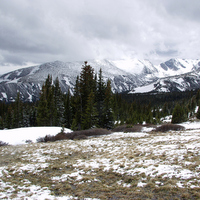 Landscape heterogeneity of nitrogen cycling in an alpine-subalpine ecosystem (Dissertation)
Microbially mediated nitrogen cycling rates are heterogeneous across landscapes, with disproportionate activity occurring in biogeochemical hot spots. My dissertation examined landscape heterogeneity in soil nitrogen (N) cycling pools and fluxes in a 0.89 km2 site at the alpine-subalpine ecotone. My data showed that a large percentage of total inorganic N pool sizes and associated cycling rates were attributable to a small percentage of hot spots. We also discovered a spatially inverse relationship between atmospheric N deposition and N-fixing plant abundance. 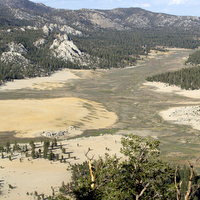 Sagebrush encroachment in subalpine meadows of the Sierra Nevada Mountains
Over the last 100 years, sagebrush shrubs (Artemisia rothrockii) have encroached into subalpine meadows in the Sierra Nevada Mountains due to groundwater decline associated with livestock grazing. We discovered that sagebrush transpiration does not dry out the soil during encroachment as we hypothesized it might. Using stable oxygen isotopes, we also showed that both young sagebrush plants and resident herbs used shallow soil water but were also able to access deeper water. Nutrient cycling rates increased with shrub encroachment.