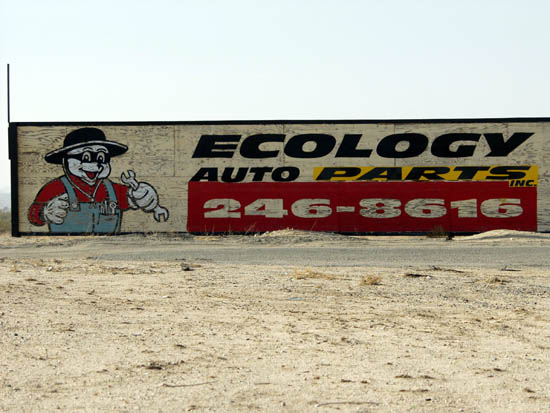 N HIS ESSAY, "Ideas of Nature," Cambridge professor Raymond Williams observed that "the idea of nature contains, though often unnoticed, an extraordinary amount of human history." Likewise, I would suggest, the word ecology stores a wealth of environmental history. It began as a branch of biology, oekologie, defined by German evolutionist Ernst Haeckel in 1866 as the "relation of the animal both to its organic as well as its inorganic environment." Since then, it has been used for philosophical movements like Arne Naess's Deep Ecology, tangentially related fields like Ellen Swallow Richards' home economics movement (which she called oekology) and myriad environmentalist endeavors like ecology.com and "The Ecologist, " a periodical. And now, apparently, it is an auto parts vendor in the Mojave Desert. Among many, many others. But still, the word ecology retains a definition close to Haeckel's--the study of the interaction between organisms and their environment--for about 5-10 thousand scientists who call themselves ecologists. It was on my way to the largest congregation of these scientists, the annual meeting of the Ecological Society of America, that I stopped to photograph this billboard somewhere near Adelanto, California on Highway 395.